There have been lots of renovations that are happening in the city of Baltimore, and the majority of these big changes and renovations are happening in Charm city’s iconic landmarks that have been part of the city’s history and culture for so many years and that locals and tourists have actually fallen in love with these landmarks. Continue reading the article to know which of the iconic Baltimore landmarks are undergoing a major overhaul.

Lauren Cohen of Baltimore Magazine discussed the planned revival of the iconic Marble Bar into a community cafe. Marble Bar has become a haven for those who have been living in Baltimore in the 80s. More details about this news below. 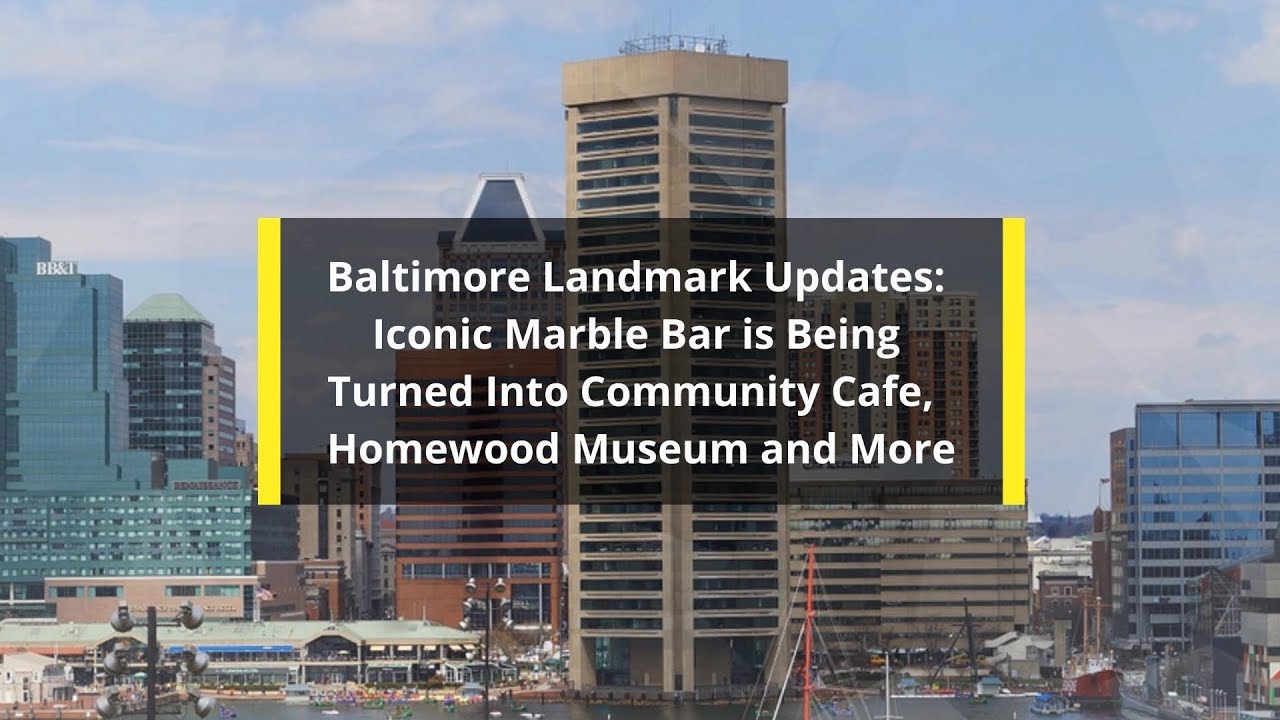 The Iconic Marble Bar is Being Revived Into a Community Cafe

As a teenager living in Carroll County in the early ’80s, David Koslowski always dreamt about going to the Marble Bar beneath the old Congress Hotel on West Franklin Street. The local music veteran, now co-owner of record store cafe Baby’s on Fire in Mt. Vernon, remembers being an avid listener to WCVT—Towson’s indie-rock radio station that predated what is now WTMD.

“When they did the concert calendar you would hear of Talking Heads or Iggy Pop playing at the Marble Bar,” he says. “And I was like, ‘I gotta get to that place. That’s where my tribe is.’’’

Unfortunately, Koslowski just missed being old enough to get in. It was around that point that Maryland changed the legal drinking age, and by the time he turned 21, the storied subterranean music venue had already closed its doors. It wasn’t until last year, when the Baltimore Architecture Foundation hosted its annual Groundhog Day fundraiser in the long vacant space, that Koslowski finally got to experience the place he had envisioned going to for so many years as a high school kid.

For one night last February, former Marble Bar alums and architecture enthusiasts packed the basement venue to sip cocktails from W.C. Harlan while marveling at the original moldings and 72-foot namesake bar. The soundtrack for the evening was provided by indie-pop rockers Super City, along with a playlist spun by Koslowski—who featured acts (including local punk legends Reptile House and Thee Katatonix) that played at the bar in its heyday. Learn more about this news here…

A lot of those who have been in this place many times in the 80s and 90s would be very sad with the planned remodeling of the iconic Marble Bar. The place has been the home for them, listening to the music played in the 72-foot namesake bar. Some of the iconic music played include the indie-pop rockers Super City as well as local punk legends Reptile House and more. People though hope that the planned revival is for the good of the iconic landmark, as well as to the entire city of Baltimore.

As America’s first research university and the basis for modern medical education, Johns Hopkins University has had an incredible impact on its home city of Baltimore and the world. With a history of over 140 years, here’s a brief overview of this American institution.

Johns Hopkins (whose unusual first name came from his great-grandmother’s surname) was a charitable businessman in 19th-century Baltimore and a key investor in the Baltimore & Ohio Railroad, the first major railroad in the United States. Hopkins had been pulled out of school to help run the family plantation as a boy, but he desired to give others the opportunity to get an education.

The Johns Hopkins University opened in downtown Baltimore on February 22, 1876, with Daniel Coit Gilman as its first president. Gilman and the trustees dedicated the university to “Knowledge for the world,” making original research the backbone of the institution. Though built on existing German university models, this was a big change from what American colleges were doing at the time. To that end, Gilman launched a university publication agency in 1878 to print and issue their research. Later renamed the Johns Hopkins University Press, it is now the oldest continuously running university press in the U.S.

In 1902, the Homewood estate, originally gifted by Charles Carroll (a signer of the Declaration of Independence) to his son, was transferred to the university to build a bigger campus. The main house was kept intact as a museum, and the new campus buildings modeled its Federal brick-and-marble style. While the medical and nursing schools stayed near the hospital, by 1924, the other schools had made their home at Homewood. Learn more here…

John Hopkins University has had a huge impact on its home city of Baltimore, with more than 140 years worth of history, the school was the country’s first research university as well as the basis for modern medical education. Moreover, it is the home of the John Hopkins Museum, located at the Homewood estate. The main house was kept intact and made into a museum, which is now the host of the annual evening of traditional beverages.

Jess Mayhugh of Baltimore Magazine wrote an article about the said event, which explores the history of Maryland rum and giving guests a huge dose of history with a spoonful of spirit. Read the entire article below to learn more.

If the thought of rum conjures up images of pirates, college parties, and boozy daiquiris, you aren’t alone. But the spirit itself has a much more layered and complex past—one that you can explore at the 23rd Evening of Traditional Beverages put on by the Homewood Museum at Johns Hopkins University.

The annual event, this year held at the campus’ Mudd Hall on May 30 from 6-8 p.m., gives guests a big dose of history with a spoonful of spirits, live music, and local food all to benefit the museum and its future endeavors.

“It’s a fun way to think about history,” says Homewood Museum curator Julie Rose. “We haven’t focused on rum in over 15 years and I know it’s a big part of local lore.”

Indeed, rum was a huge imported product in 18th-century Maryland, mostly being shipped from Barbados into London Town and Gardens in Edgewater. According to historian Kyle Dalton, who will be speaking at next week’s event, the elixir was an apt symbol for cultural mores of the time.

“Maryland was a society of contradictions, as it was very communal but strictly hierarchical,” explains Dalton, coordinator of membership and development for the National Museum of Civil War Medicine in Frederick. “Rum was a luxury product, so you knew that it was a fairly refined society drinking it. But it was most commonly consumed as a rum punch with colonists drinking directly from the same bowl, so that reflects the communal society.” Click here to read the rest of this post…

This event is expected to bring thousands of people to witness the annual event to be held at the campus’ Mudd Hall. According to the museum’s curator, it has become commonplace for museums to try and replicate what’s in the past, just like a common history exhibits. Those who are into alcoholic beverages, this is the perfect time for you.

Baltimore is definitely a fun place to be with. Though there are lots of changes happening in the city, this does not change the fact that Baltimore is a city full of charm. Some good things have to say goodbye, but their contribution to Baltimore’s history will never be forgotten. For more of updates within the Charm City, visit https://www.dependablehomebuyers.com/maryland/baltimore/.