The city of San Antonio in Texas is the second most populous city in both Texas and in the Southern United States. It is also the seventh most populous city in the country. This means that San Antonio is a busy city with millions of people roaming around the city (both locals and tourists). In addition, San Antonio has received much success and rapid growth over the past ten years (and counting). Its deep history, Spanish influence, and a popular tourist destination make San Antonio among the best cities to live. 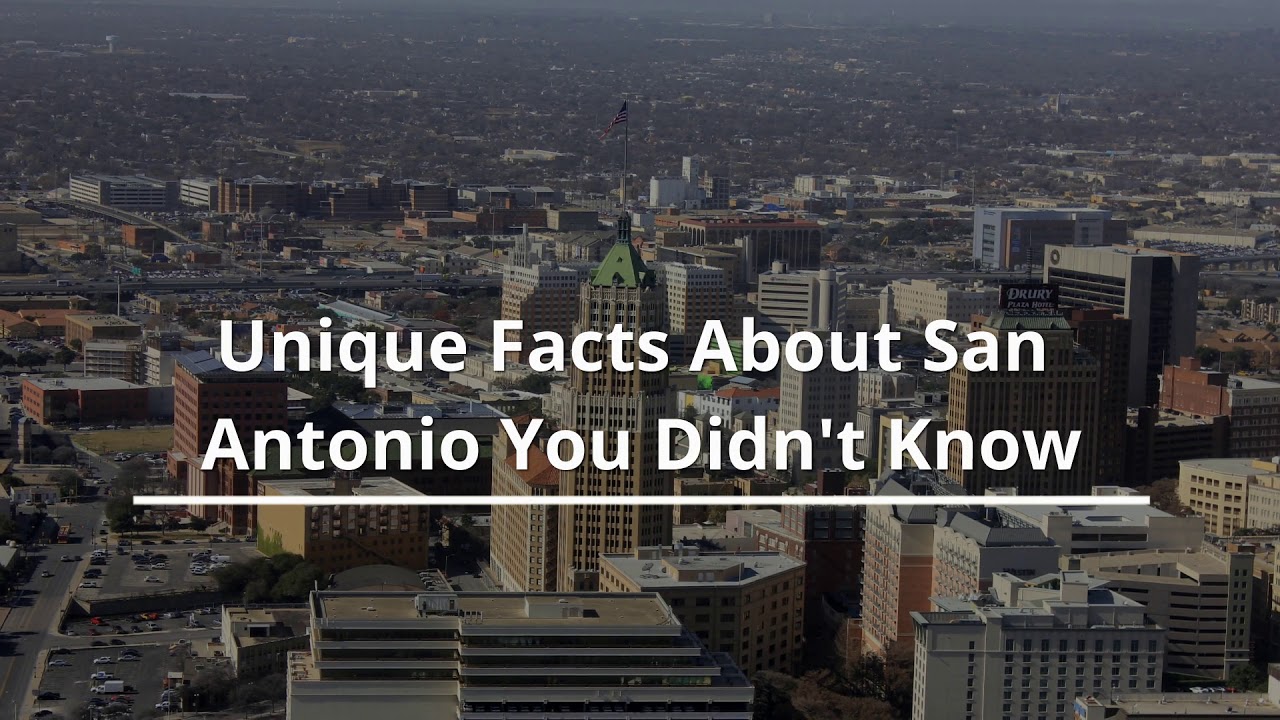 Planning to move into the city? There are still lots of important things you need to know about San Antonio, starting with these facts that will surprise you according to Tanner Saunders of Matador Network. Check out these awesome trivia below.

15 Facts about San Antonio that Will Surprise You

In fact, it’s the second-biggest city in Texas. By area, it’s twice the size of Chicago. With a population of over 1.4 million, it’s the seventh-largest city-proper in the country and is gaining on all six above it. This isn’t some second-tier cowboy outpost — it’s a major metropolitan hub.

2. We’re home to the first modern art museum in the Southwest.

The McNay Art Museum brought modern art to Texas in 1954, when Marion Koogler McNay, an art teacher and heiress to an oil fortune, donated her San Antonio mansion to the art cause. These days, it’s home to works from some of the best artists of all time, like Picasso and Georgia O’Keeffe. Then there’s the awesome local art — which you probably won’t find at MoMA — like the contemporary Latino prints and Southwest art collections. All in all, there are now some 20,000 works at the McNay.

3. We really know how to keep it cool.

San Antonians know a thing or two about heat…which prompted us to learn about cold. In 1928, the 21-story Milam Building in downtown San Antonio became the first air-conditioned high-rise in the US. The AC system kept temperatures to 80 degrees, a welcome relief for all those workers doing…whatever people did in offices decades before the first desktop computers. But we didn’t stop with office buildings — San Antonio is home to country’s first air-conditioned bank, hotel, and Catholic Church. And did we mention the creator of Gatorade was from San Antonio?

If you’ve been to South Texas, you’re probably familiar with our thing for tamales. Yes, they’re a staple Mexican food, and yes, we’re totally obsessed with them. So obsessed, in fact, that a local high school made 17,106 tamales — that’s 2,420 pounds — in 10 hours during a tamalada. This put the Alamo City in the pages of the Guinness World Records,…though the officials did have to create a new category: “Most Tamales Made in a 12-hour Period.”

5. We turned a brewery into an art museum.

The San Antonio Museum of Art, which opened in 1981 in the old Lone Star Brewery complex, may not serve up local brews, but its collection of 30,000+ objects spanning 5,000 years will probably quench a different kind of thirst. Even the building itself is impressive, dating to 1884.

Shaquille O’Neal, star of Kazaam (oh right, and also 15-time NBA All-Star), went to Robert G. Cole High School in San Antonio. There, the skinny, nearly 7-foot-tall teenager led his team to a 36-0 state championship record in 1989 (they had a 68-1 record over two years). He also still holds the state record for number of rebounds in a season, with 791. In 2014, Shaq came back to the Texas state basketball tournament for a reunion with his former high school teammates, still towering over them like he did 25 years ago.

These are cool trivia that helps in getting to know more about San Antonio, Texas. Being the second-largest city in the state of Texas, it means that there are still a lot of things you need to know about San Antonio, apart of course from it being known as the king of tamale making

Amelia Josephson of Smart Asset enumerated some of the most important things to know before moving to San Antonio. It was an awesome list, so check them out below.

13 Things to Know About Moving to San Antonio

With a population of around 1.5 million, San Antonio is a livable city with a small-town feel. Rich in history and boasting a diverse population, the city is attracting new residents all the time. The Texas city has been getting more attention lately and if you’re thinking of moving to San Antonio, here are 13 things you should know before packing up your belongings.

1. The River Walk is worth the hype.

Not many American cities boast a pedestrian-only street along a beautiful river, lined with restaurants, bars and local shops. It’s a year-round attraction, as well as the site of popular annual festivals along – and on – the river.

The performance of the San Antonio Spurs drives a lot of water cooler conversations in San Antonio. Even if you’ve never been a huge basketball fan in the past, it’s worth catching a Spurs game at least once after moving to San Antonio. The NBA team is part of the culture of the city and a major talking point.

3. The population is on the rise.

San Antonio appears on a lot of lists of fast-growing cities with booming economies. There’s an air of optimism in the city. This year, San Antonio made SmartAsset’s list of the best American cities for tech workers, as well as the top 10 best cities for first-time homebuyers. With its affordable homes, San Antonio can be a great place to settle.

If you’re moving to San Antonio from a state with an income tax you’re in for a pleasant surprise. The Lone Star State has no income tax, and cities don’t impose their own income taxes. Sure, the city’s combined state and local sales tax rate of 8.25% is a little high, but the lack of an income tax goes a long way. On the other hand, the average effective property tax rate in Bexar County, where San Antonio is, is over 2%.

5. The food in San Antonio is amazing – and we don’t just mean tacos.

San Antonio has a highly regarded food scene that extends from food trucks to haute cuisine. Many say the taco is the star of the show, and we wouldn’t want to argue otherwise. But it’s by no means the only part of San Antonio’s culinary life that’s thriving. Local coffee roasters, breweries and even Hill Country wineries are attracting loyal customers, too. And of course there’s Texas barbecue. See full post here…

Those are more than enough reasons for you to move into San Antonio. With its population continue to rise, which at some point also translates into a booming economy. In addition, the city also favors first-time homebuyers for it offers much more competitive home prices. These facts would help a lot in your decision to settle into San Antonio.

When you think about Texas, you will most likely think of San Antonio. We all know about the River Walk, the Alamo, and SeaWorld, along with the rich Hispanic culture that San Antonio calls its own. Here are 10 things about San Antonio you probably didn’t know.

San Antonio is the most visited city in Texas

This famous fried chicken fast food place started in 1952 as Church’s Fried Chicken To Go in San Antonio, right across the street from the Alamo. It’s now the fourth largest chicken restaurant in the country behind KFC, Chick-fil-A and Popeyes Chicken.

San Pedro Park is the oldest park in Texas and the second-oldest in the nation. It officially became a public park in 1852. The San Pedro Park is home to so much history. During the Civil War, the park was used as a prisoner of war camp. Now, the park has over 60 hiking trails, a swimming pool, a skate plaza, the San Pedro Library, and much more.

The San Antonio Zoo is the third largest in the US

This 35-acre zoo has over 3,500 animals and an aquarium. It’s the 3rd largest zoo in the nation and it breeds a number of endangered species, including leopards, African lions, and Komodo dragons.

The Alamo is the most visited attraction in all of Texas

‘Remember the Alamo!’ Everyone remembers the Alamo in Texas. More than 2.5 million people visit the Alamo a year, making it the most visited attraction in Texas.

Being the most visited city in Texas, San Antonio is home to thousands of tourists every week exploring not just San Antonio but entire Texas. The foods, the attractions and more importantly the hospital people that welcome the tourists and soon to be residents of the awesome city.

It was mentioned somewhere in the article that home prices in San Antonio are affordable and competitive. This is actually a piece of very good news especially for first-time homebuyers. If you’ve decided to move into San Antonio and looking for someone to help you, Dependable Homebuyers can help you find affordable homes in the San Antonio area. To learn more about us visit at https://www.dependablehomebuyers.com/texas/san-antonio/ and we look forward to hearing from you.